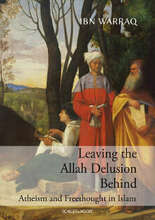 Leaving the Allah Delusion Behind

Atheism and Freethought in Islam

»This beautifully written book is a tour-de-force of astonishing scholarship.« (Richard Dawkins)
»Ibn Warraq exemplifies the rarely combined qualities of courage, integrity, and intelligence.« (Bernard Lewis)
»Warraq’s work has been responsible for a paradigm shift, revivifying the light of reason as it bears upon the dominant notions about the meaning of the Qur'an in our times.« (Judith Mendelsohn Rood)

Leaving the Allah Delusion Behind begins with a pioneer­ing study of freethought and atheism in both Classical and Modern Islam, a much neglected subject. After a look at zindīqs (atheists, heretics, dualists) and dahris (materialists and atheists), Ibn Warraq examines such heretics as Ibn al-Rāwandī, Al-Rāzī, al-Ma‘arrī, ‘Umar Khayyām, and Akbar the Great.
In Part Two, the author discusses the fascinating story of the Islamic origins of The Treatise of The Three Impostors (a refutation of the revealed religions of Judaism, Christianity, and Islam, and a scathing look at their respective prophets, Moses, Jesus, and Muhammad), and the philosophy of Averroes (Ibn Rushd), and its enormous influence on Western freethought.
Part Three brings the story up to the nine­teenth-, twentieth-, and twenty-first centu­ry. We are witnessing monumental changes in the beliefs of peoples of Islamic lands, changes whose implications and consequences have not yet sunk in. The general public both in the West, and in the Middle East is unaware of this modern phenomenon of literally thousands of young men and women from Islamic societies leaving Islam, and embracing atheism. Their presence can be felt on the internet and the social media.

Ibn Warraq, a leading figure in Koranic criticism, is the author of eight pioneering books on Islam and Koranic criticism, including the classic Why I am Not a Muslim, 1995. Warraq’s op-ed pieces have appeared in the Wall Street Journal in America and The Guardian in London, and he has addressed distinguished governing bodies all over the world.